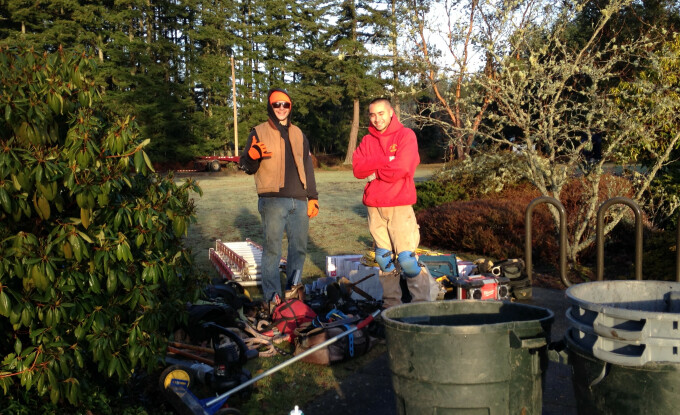 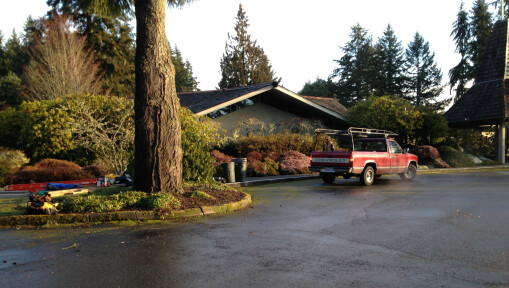 The roofers arrived at 8:30 a.m. Monday morning to begin tearing the aging and failing cedar shingles off the sanctuary roof. There's frost on the hard ground and on the roof, and the crew has special spiked footwear to do the job. It's cold out, too, about 36 degrees.

The staging area and trucks are parked outside the front door, to the left as you're looking at the entryway. You'll need to park elsewhere for a few days while they get this part of the job done.

Members of Bethany raise in excess of $30,000 to fund the new roof. It will be metal, to go with the roof that covers the fellowship hall, installed in 2009.

It looks relatively dry this week, except for a 40 percent chance of rain on Wednesday. Stop by and see the work.

Readings for Worship This Coming Weekend 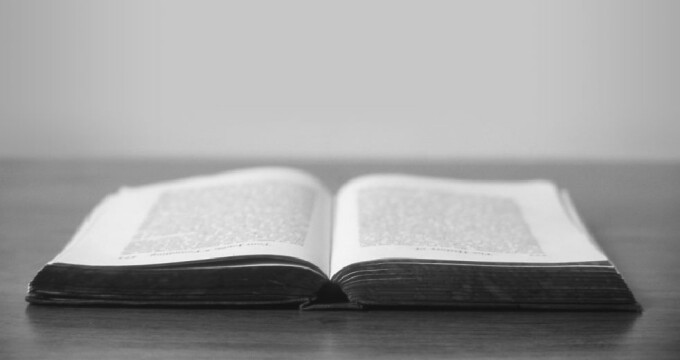 Here are the texts for worship this coming Saturday and Sunday:

But there will be no gloom for those who were in anguish. In the former time he brought into contempt the land of Zebulun and the land of Naphtali, but in the latter time he will make glorious the way of the sea, the land beyond the Jordan, Galilee of the nations.
The people who walked in darkness have seen a great light; those who lived in a land of deep darkness — on them light has shined. You have multiplied the nation, you have increased its joy; they rejoice before you as with joy at the harvest, as people exult when dividing plunder. For the yoke of their burden, and the bar across their shoulders, the rod of their oppressor, you have broken as on the day of Midian.

The Lord is my light and my salvation; whom shall I fear? The Lord is the stronghold of my life; of whom shall I be afraid? One thing I asked of the Lord, that will I seek after: to live in the house of the Lord all the days of my life, to behold the beauty of the Lord, and to inquire in his temple. For he will hide me in his shelter in the day of trouble; he will conceal me under the cover of his tent; he will set me high on a rock. Now my head is lifted up above my enemies all around me, and I will offer in his tent sacrifices with shouts of joy; I will sing and make melody to the Lord.

Now I appeal to you, brothers and sisters, by the name of our Lord Jesus Christ, that all of you should be in agreement and that there should be no divisions among you, but that you should be united in the same mind and the same purpose. For it has been reported to me by Chloe’s people that there are quarrels among you, my brothers and sisters. What I mean is that each of you says, ‘I belong to Paul’, or ‘I belong to Apollos’, or ‘I belong to Cephas’, or ‘I belong to Christ.’ Has Christ been divided? Was Paul crucified for you? Or were you baptized in the name of Paul? I thank God that I baptized none of you except Crispus and Gaius, so that no one can say that you were baptized in my name. (I did baptize also the household of Stephanas; beyond that, I do not know whether I baptized anyone else.) For Christ did not send me to baptize but to proclaim the gospel, and not with eloquent wisdom, so that the cross of Christ might not be emptied of its power. For the message about the cross is foolishness to those who are perishing, but to us who are being saved it is the power of God.

Now when Jesus heard that John had been arrested, he withdrew to Galilee. He left Nazareth and made his home in Capernaum by the lake, in the territory of Zebulun and Naphtali, so that what had been spoken through the prophet Isaiah might be fulfilled: ‘Land of Zebulun, land of Naphtali, on the road by the sea, across the Jordan, Galilee of the Gentiles — the people who sat in darkness have seen a great light, and for those who sat in the region and shadow of death light has dawned.’ From that time Jesus began to proclaim, ‘Repent, for the kingdom of heaven has come near.’ As he walked by the Sea of Galilee, he saw two brothers, Simon, who is called Peter, and Andrew his brother, casting a net into the lake — for they were fishermen. And he said to them, ‘Follow me, and I will make you fish for people.’ Immediately they left their nets and followed him. As he went from there, he saw two other brothers, James son of Zebedee and his brother John, in the boat with their father Zebedee, mending their nets, and he called them. Immediately they left the boat and their father, and followed him. Jesus went throughout Galilee, teaching in their synagogues and proclaiming the good news of the kingdom and curing every disease and every sickness among the people.