Hello from inside the Path of Totality 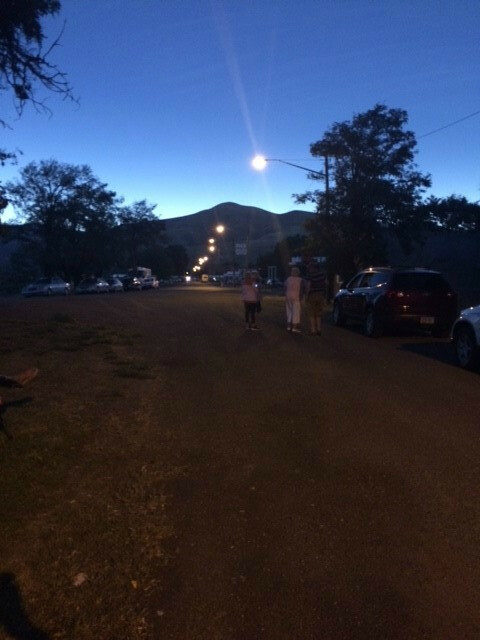 Some of my family members and I were lucky enough to be in the middle of the Path of Totality yesterday, in Huntington, Ore., in the very southeast corner of that state. Here’s myself, my husband, Lloyd, and our daughter, Geneva. And here’s the town of Huntington when things were at their darkest.

It took 12 hours to get home yesterday, thanks to a myriad of highway construction projects slowing things down all the way from there to here.

We stayed in the dorms at Eastern Oregon University, and were enjoying La Grande so much we nearly forgot about the eclipse and the Path of Totality, 100 miles south.

Pendleton, La Grande and Huntington are all old railroad towns built on the Oregon Trail. La Grande in the 1860s had six passenger trains stopping there daily. You can still feel the old West now during a stroll downtown.

Posted by Rachel Pritchett with
August 16, 2017

From Guest Pastor Shirley Funk: “I can’t hear you”

By the Rev. Shirley Funk

What would it take for the whole of the world to just be quiet and listen? Would elected officials and leaders stop blaming each other through shallow and meaningless tweets, hollow news feeds and time-wasting legislative votes? Would the opposing sides of nations at war come to any better conclusions for solving their differences if the bombing stopped and understanding crept into the silence? Would affection among feuding family members grow if certain hot-button topics were never brought up at a reunion? Would two people who were at odds over some real or imagined slight be able to reconcile and once again embrace their friendship if they would more quickly listen than speak? What would it take for us to listen to the needs of a world of hurting brothers and sisters, perhaps even us, who long for wholeness and healing, to be understood and affirmed, to be embraced and welcomed? What would it take?

Did Jesus really walk on the water? And why couldn’t Peter follow in his steps? Why did Peter step out of the boat and falter? Was it doubt or fear or a scarcity of faith that made his feet heavy? Like the miracle story in the verses of Matthew just preceding our lesson for today, the story of the five loaves and the two fish and the feeding of the five thousand, this is one of the most well-known portraits of Jesus painted by the gospel writers. Over the centuries it has become a lasting image of the miraculous, other-worldly, not-so-human Savior of the world, subject to misinterpretation and misunderstanding. Walking on the water is the subject of jokes, of sarcasm, of criticism of character. Oh, you know, he thinks he can walk on water, better than the rest of us. In so many ways, this portrait of Christ, which we both revere and question, often leads us to our own private conversations. When we or someone we love suffers from disease or illness, we wonder, “Why can’t I have enough faith to heal?” And when our fortunes are slipping away and we might be on the brink of losing our house or our job or our retirement savings, or perhaps all three, we wonder, “Why can’t I have enough faith to succeed?” And when our hearts are broken by a marriage or friendship gone wrong, by bitter divides of family, we wonder, “Why can’t I have enough faith to feel happy once again?” We see Jesus as so perfect, and in comparison ourselves as so inadequate, and we wonder what hope there might be for us. In the tumultuous waters of contemporary society, when winds of change blow strong and when conflicts and violence make for a stormy and dangerous world climate, we wonder if the hand of God will reach down for us and pull us up out of the raging sea.

Shirley says, ‘When I ventured from New Jersey to the far west of western Pennsylvania to attend college, Sunday evenings were reserved for long lines of students waiting to call home from the one pay phone at the end of the dorm hall. That or a hand-written letter were the basic options of long distance communication in what might be called the good old days. When I made my Sunday evening call, my parents would carefully work through their list of questions to make sure they covered all topics and didn’t go past their self-imposed three-minute basic cost limit. And they spoke loudly. After all, sound had to travel a long way over the wires.’ Well, now we can walk anywhere – on a city street, on a trail in a national park, in an airline terminal, in a store, on a boat, and someone - sometimes seems like everyone - will be holding a cell phone up to their ear and say, by words and a rolling of the eyes and gestures the person on the other end can’t see, I can’t hear you! The voice gets louder and insistent and repetitive, we speak until we get a reply, one way or another. It takes us a while to realize that loud voices will not improve cell tower availability! Those fading conversations are so frustrating, and we can spend a lot of our air time endlessly shouting, I can’t hear you! The alternative, of course, which those under the age of fifty have mastered and far outpace their elders, is to text, silent, swift movement of fingers which create no noise, but may still not get any response. And we can’t actually hear anything, or anyone.

These are the questions we ask ourselves as we picture the Biblical scene. Jesus, alone in a quiet place to contemplate his ministry, praying to his Father to direct his steps and guide his ways, to give him strength and patience and courage. The disciples in the boat, being pushed further and further away from shore and further and further away from their leader in the distance. The waves slapping at the sides of the boat and splashing inside it. Disciples cold and wet and scared, desperate for direction and rescue.

Shirley says, ‘About eight years ago I finally joined the twenty-first century and got a dish put on my roof, a dish to connect me with the world of multiple channels of old movies, sports, and lots of worthless TV. How easy it is, in a down moment at home, when I should be pushing the vacuum cleaner around or scrubbing the bathroom sinks or cleaning out an overstuffed file drawer, to slouch in the rocking chair and flip on the TV, and catch another episode of House Hunters, or Chopped. One evening I clicked on and watched a part of a program, one of those Ten Best of something. This was Ten Best and Most Dramatic Rescues, rescues from raging waters and the brink of a dam, from overturned boats, from the edge of Niagara Falls. People were dangling from ropes and down in little holes. The work of the rescue parties was dramatic, and in spite of my best intention I got caught up in the drama. And, as is the case with such reality TV, I wondered what I would do if I were in the situation. Some of the people waiting to be rescued panicked, some were calm. You could see the desperation in their faces, the wild, questioning look, Have I come to the end of my life? And you could see some grabbing and pushing at their rescuers, out of control and wanting to control their own lifeline.’

And there was Peter, scared and wet and desperate for help and not even seeing who was right there in front of him all along. And not even hearing the voice of rescue.

What would it take to just be quiet and listen? The Church of the Holy Apostles in New York City, is an old structure of gorgeous architecture and stained glass windows. As the neighborhood around it changed in character and characters, the budget dwindled and the bills increased. As one last ditch effort at breathing new life into the mission of the church, in 1982 they began a free lunch program, which in eight years grew from 35 people daily to 900 served daily, stretching the capacity of the mission house adjacent to the sanctuary. Providentially, during roof repairs to the sanctuary, a fire broke out and caused major damage. During the repair, all the pews had to be taken out. What’s church without pews? Before the members of the congregation rushed to the rescue, they paused, and asked, Why not leave the pews out and use the worship space, which was empty and unused Monday through Friday, for the lunch program? They now serve 1,200 meals a day, with volunteers taking the tables down on Friday afternoon and setting up the folding chairs for the weekend. The budget is now $2.7 million, which comes from businesses, foundations, the city – and the 160 members who, instead of closing down a church, are part of a vital and compelling community of faith. Elizabeth Maxwell of the church staff, when asked why they do this, replied, Well, we do this because Jesus said to feed the hungry. There’s no more to it than that. Jesus told us to take care of the poor and hungry and those in prison...In all the intricacies of scriptural interpretation, that message could not be more clear. Those of us at Holy Apostles feel we have a Sunday-Monday connection. The bread and wine of the Eucharist we share on Sunday becomes the food we share with our neighbors during the week. And they have become a lifeline, a beacon of hope in the city’s darkness.

What does this have to do with the waves washing over the boatload of disciples? What does this have to do with our own stormy lives? What does it have to do with our reluctance to trust Jesus enough to step out in faith? Coming near to the end of their rope, these people of God stopped to listen, to listen to their neighbors, to listen for God’s purpose, to listen for God’s direction. I am sure it was a frightening place to be. But whether it is for us together or for each of us alone, we can be assured that Jesus is calling to us to step out in faith, and promising that he will be with us.

Posted by Bethany office with