When our daughter, Maren, studied in Chile during a semester in college, Laurie and I traveled to Chile along with some friends to visit her there. We arrived during Holy Week, and so I walked to the local Lutheran Church to attend worship on Easter Sunday. It was a historic church there in Valparaiso, obvious by its architecture that it has a strong German influence. Indeed, German script adorned the inside walls of the sanctuary, most likely including the words “Ein Feste Burg” (A Mighty Fortress).

When the worship began, I had little comprehension of what was being said, other than guessing at familiar liturgical calls and responses. It sounded foreign to me because, being in Chili, the worship was of course conducted in Spanish. And then we got to the great Easter hymns, again familiar in their tunes, but difficult for me to shape the words…until we arrived at the “ALLALUIAS”. It was then that I belted out with all the gusto I could muster, “Alleluia!” That is the universal language of Easter. In the midst of things that seem so foreign, “ALLELUIA!”

That memory returned to me as I consider this Holy Week into Easter. Although we reside in our familiar country, mostly surrounded by a familiar language, when not delightfully enriched by the beauty and diversity of other languages, it can feel like a foreign time to many of us: The unsettledness of “coming out of” the pandemic is very real; the political rhetoric that is so raw and often-times mean-spirited puts us on edge; the war in Ukraine makes us off-balance, to say the least. Such language is foreign, and we wait for the hopeful, the true, the loving.

And then, let us incline our ears to hear the voice of Jesus, as he speaks to his followers in the locked room: “Be not afraid. Peace be with you.” 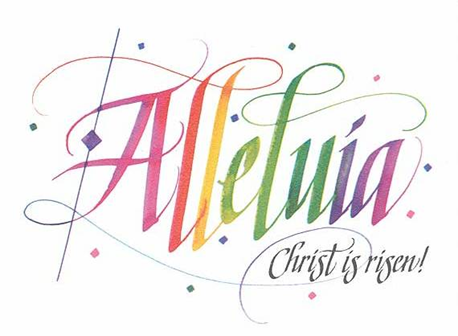